The State Government is developing an Aboriginal Ranger Program to create jobs and training and community development opportunities for Aboriginal people across a range of tenures in regional and remote communities across Western Australia. The Government has committed $20 million to the program over five years, which will see $4 million available each year to Aboriginal organisations, corporations and ranger groups.

The Government recognises the social, cultural and environmental benefits of Aboriginal ranger programs and is aware of the excellent work that has already been undertaken by established Aboriginal ranger groups throughout the State. Such programs have provided an integral step towards improved community wellbeing and reducing poverty through economic opportunities and building leadership in remote and regional communities.

Commencing in 2017-18, the program will train and employ Aboriginal people as rangers to undertake land and sea management activities including:

Expressions of Interest for the first round of funding is now open. Applications must be completed and submitted by 31 October 2017. 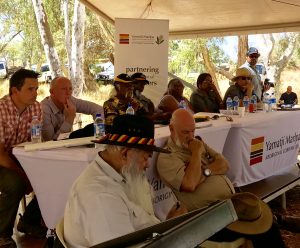 The 4th annual on-Country Bush Meeting at the Yule River meeting place was held on Wednesday 20 and Thursday 21 September 2017. It was a great gathering of Traditional Owners, Members of Parliament (MPs) and government officials.

YMAC uses the on-Country bush meeting to focus on the priority concerns of the Pilbara Aboriginal people. The Yule River meeting brings together community members to discuss legislative changes that impact them, and to gives them the chance to speak directly to Members of Parliament (MP). For some who attend, it is the first time they are given this type of opportunity. Despite the hot (40 degrees), dry, dusty conditions, over 400 people attended both meeting days.

A presentation from Hon. Ben Wyatt MLA (Treasurer, Minister for Finance, and Minister for Aboriginal Affairs) was warmly received by all. Short presentations were also made by Hon. Stephen Dawson MLC (Minister for Environment; Disability Services, and Deputy Leader of the Government in the Legislative Council), Senator Patrick Dodson and Hon. Robin Chapple MLC (Member for Mining and Pastoral Region). An open Q&A session followed the presentations from the MPs, with questions and comments from the crowd focused heavily on language preservation and the poor portrayal of Aboriginal people in the media.

The key resolution from this year’s meeting is that the Traditional Owners will form an independent representative group to give advice to the government on behalf of Pilbara Aboriginal people. This is an historic achievement because, for the first time, the Traditional Owners themselves have set aside their language groups and native title issues to act as a united Voice for the purposes of advancing their agenda with the Government. Other issues that were raised with the MPs were:

In addition to a State Treaty, the Traditional Owners also wholeheartedly endorse the Statement from the Heart. Collectively, they passed a resolution, “We historically made our voice strong in the Pilbara today. Now we historically join with other First Nations in calling on our WA State and Federal Government to fully commit to a process towards Voice, Treaty and Truth.”

The Annual On-Country Bush Meeting at Yule River is a forum that allows YMAC to drive outcomes from the momentum gained on the ground.

We have already started planning for next year. Please save the dates: 11-12 July 2018.

The Littlewell mob in Western Australia’s mid-west are on the trail of realising a dream.  Seven years after setting out to preserve the old Littlewell reserve where they and family members grew up, it is set to open as a heritage precinct and walking trail by the end of the year.

The Littlewell reserve sits on the outskirts of Mingenew, a town nearly 400km north of Perth and about 100km south-east of the coastal city of Geraldton. A 500m walking trail that incorporates the reserve’s history and the stories of those who lived there could open before Christmas.

Wattandee elder Thomas Cameron, who grew up at Littlewell, says the four hectare reserve — which operated from 1898 until 1972 — was originally named the Mingenew Aboriginal Reserve, but residents called it by another name.

“We called it Littlewell because prior to having two-bedroom houses built by Native Welfare at the time, we lived in humpies and the well supplied people who lived on the reserve at the time,” Mr Cameron, 63, said.

A great grandfather, Mr Cameron said the site was important to hundreds of people who had lived there and their descendants. He hoped tourists and other visitors would be interested in the reserve’s history. Guided tours may be held.  “I’m a great grandfather now and I’ve taken my grandson back there to country and told him this is the little well, this is where we grew up and where we learned to work and we learned to corroboree and all that,” Mr Cameron said. “It’s important to our children and their children to give them a better understanding and concept of how we lived and how life was back in the reserve days.”

Thomas Cameron and the people featured in this article and in the photo members of the Southern Yamatji claim group.

Applications for this position close on the 20 October 2017. If you have questions, please contact:

The Department of Planning, Lands and Heritage (Department) engages with Aboriginal Western Australians and all levels of Government to improve the delivery of services and to facilitate the development of policy and programs, which deliver suitable economic, environmental and social benefits to Aboriginal communities.

The Department is seeking two experienced individuals to undertake the role of Senior Heritage Officer. One role is based in Geraldton and one is based in South Hedland (although the Pilbara role may be located in Karratha or Roebourne and applications are also encouraged from these areas). Both are permanent full-time positions. Aboriginality is a genuine occupational requirement of this position under Section 50D of the WA Equal Opportunity Act.

Reporting to the Team Leader Regions, the successful candidate will:

Please use the links below to view the Department website for a job description form and further information about the duties and the job related requirements which will be used to select the successful candidate. Suitable candidates, not selected to fill this vacancy, may be considered for other employment opportunities (in like positions and like locations) over the next 12 months.

It’s that time of year again when the YMAC Spatial Team hand out the annual ‘Clive Poole Spatial Excellence Award’.  This award honors and remembers Clive who joined YMAC from the National Native Title Tribunal in 2012. He had an enormous impact on how spatial data was viewed, managed and used in the department. Prior to 2012, YMAC had no dedicated spatial information officer so Clive had a massive job organising and cataloging data, setting up spatial systems and processes, and educating staff about spatial data, its use and the benefits it can bring to the workplace.

Each year the YMAC Spatial Team presents the award to a staff member in recognition of their commitment, willingness and enthusiasm to learn about all things spatial. There’s been a lot of strong competition this year (and many excellent QGIS analysis and maps produced). After much deliberation, the YMAC Spatial Team have chosen David Taft, Claim Lawyer based in the Geraldton office, to receive the award. 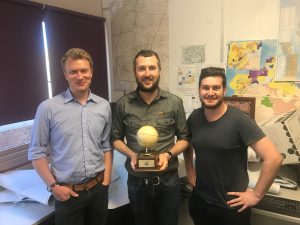