Each year the Nyangumarta rangers produce a ‘performance story’ to show the progress made during the year. The story can use any type of media, provided it describes the achievements, and sometimes the challenges, of the reporting period.

This year the rangers have chosen to produce a short video about their activities. It also includes reflections from Elders and shows the growth of the Nyangumarta Indigenous Protected Area and Ranger program.

We hope you enjoy watching it here 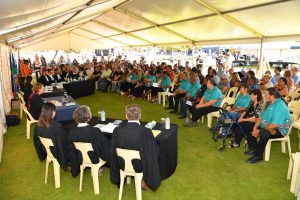 Held at Edith Cowan Square, the hearing was attended by the Federal Court, representatives of the State and Federal Governments, other parties and most importantly, the Traditional Owners.

The agreement, the first of its kind in Australia, includes both native title recognition and a comprehensive economic package, including cash and assets, which finally came to fruition after 25 years. The totality of the settlement is of a scale that could transform Western Australia’s Mid West region into a thriving economic force.

The judgement by Hon. Justice Debra Mortimer means that the Native Title Holders will continue to have a role in caring for Country through exercising their procedural rights in relation to the land and waters covered by their application. 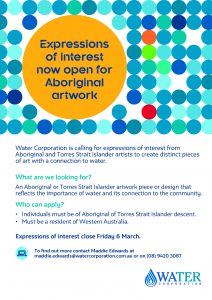 Water Corporation is calling for Expressions Of Interest (EOI) from Aboriginal and Torres Strait Islander artists to create pieces of art that reflect the importance of water and its connection to the community.

If selected, your artwork could be adapted to be used on Water Corp vehicles, buildings, uniforms, publications, websites and more.

To submit an EOI you must be of Aboriginal or Torres Strait Islander descent and a resident of Western Australia. You have until Friday 6 March to submit your interest.