Will you join us?

The State Government’s proposed changes to the Aboriginal Heritage Act will lead to even weaker protection for Aboriginal heritage sites than we have now. Join us this Friday 26 September to show the State that Aboriginal people care about their heritage and need to have a say in what happens to it.

All Aboriginal people from WA are invited to attend an on-Country meeting at the traditional Yule River meeting place (55kms south of Port Hedland) at 11 am this Friday to discuss the proposed changes. You will have a chance to ask questions, and listen to speakers ranging from respected elders to academics and politicians.

Click here for more information about the meeting and about the issues.

YMAC is constantly working towards recognition for the rights of Traditional Owners in the Pilbara and Yamatji regions. This includes advocating at all levels of government, and YMAC provides submissions to government and other bodies on issues that affect traditional owners.

Many of those key submissions from the last two years are now available for download on our website www.ymac.org.au/media-and-publications/policy-submissions/

These documents outline YMAC’s policy positions on many of the important issues being discussed by governments today, including proposed changes to Aboriginal heritage legislation and the Native Title Act.

The Aboriginal Cultural Materials Committee (ACMC) is a body set up by the WA Aboriginal Heritage Act to advise the Minister for Indigenous Affairs on heritage matters. It makes many important decisions and recommendations that affect Aboriginal heritage in WA.
The ACMC is currently seeking expressions of interest for new members. They are looking for people with knowledge and experience in Aboriginal heritage, including experts in areas of anthropology, archaeology, ethnography and history. Aboriginal applicants are strongly encouraged.
For more information visit DIA’s website here or contact Andrea Barton, A/Executive Officer ACMC to request an application pack on 1300 651 077 during business hours.

The Ngarlawangga native title group today announced the signing of an agreement with Montezuma Mining Company Ltd (Montezuma) for the Butcherbird manganese project over 23,000 hectares of their traditional country, south of Newman, as well as consents to future mining in the area.
The agreement has seen Traditional Owners and Montezuma develop a framework for how they will continue working with each other, including assisting Ngarlawangga people into employment, agreed processes and timeframes by which heritage clearances will take place and support for tendering for new contracts for community businesses.
The signing includes an agreed process should the mining company apply for permission to disturb heritage sites, which provides both parties with a guaranteed consultation process under the Aboriginal Heritage Act (WA).
Ngarlawangga Traditional Owner Dianne Limerick said, “The discussions with Montezuma went well – we’re now hoping for jobs and business contracts to develop from this agreement.”
Yamatji Marlpa Aboriginal Corporation (YMAC) CEO Simon Hawkins said, “Montezuma listened and responded to the community’s needs throughout the process. In turn, the Ngarlawangga people were able to reach agreement quickly, giving the company certainty. Both parties are particularly focused on supporting new and existing Ngarlawangga contracting companies to benefit from this project, including incentives for community businesses”.
Click here to read the full media release. 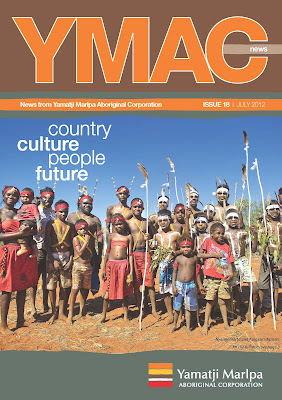 The latest issue of YMAC News is now available from our website.
It includes stories on the Nyangumarta and Karajarri joint native title determination, proposed changes to the WA Aboriginal Heritage Act, an agreement between the Ngarlawangga people of the Pilbara and Rico Resources, YMAC’s recognition at a community service award ceremony, and the launch of the Wajarri Dictionary by the Bundiyarra Irra-Wangga language program.
There are also profiles on Clarrie Cameron in our regular section “Respect for elders”, successful Yamatji businessman Fred Taylor, and YMAC staff member Daniel Shiosaki.
We’ve included a special section on the 20th anniversary of the Mabo decision, a policy update from YMAC’s policy officer, and a selection of snapshots from around the community in the last few months.
Click here to download YMAC News from our website
If you have any stories or photos you’d like to share with us, elders who you think we should profile, questions about native title, or any other letters to the editor, send them to editor@ymac.org.au.
We hope you enjoy this issue of YMAC News.

The WA Department of Indigenous Affairs yesterday announced that it has extended the deadline for lodging submissions on the Department’s Discussion Paper outlining proposed changes to the WA Aboriginal heritage regime.

The deadline for comments is now Tuesday, 26 June.

Click here for more information on the review and discussion paper

YMAC encourages all West Australians who care about protecting our rich Aboriginal heritage to have a look at the proposals and tell the Minister for Indigenous Affairs what you think about them.

In the interview, Mr Dann strongly outlined his concerns about the short timeframe for comment on such significant changes to the protection of Aboriginal heritage, and the lack of consultation with Traditional Owners over the proposed reforms.

Mr Dann said that Aboriginal people are rapidly losing their input into heritage development under the AHA, as Traditional Owners aren’t offered the same appeal opportunities as land developers.

After announcing a 12 month review into Aboriginal cultural heritage processes last May, the Government has held no formal consultation with Traditional Owners and only allowed five weeks for comment on the proposed changes to the AHA outlined in the discussion paper.

Mr Dann also said a significant review of the AHA was needed because it does not provide adequate protection for Aboriginal Heritage, and that Native Title negotiation processes are at present the only means for Traditional Owners to take part in consultations over protected Aboriginal sites.

For more information about the proposed reforms to the AHA, including links to the discussion paper and YMAC’s media release, please click here.

YMAC speaks out on proposed reforms

The Minister for Indigenous Affairs has today released a discussion paper on proposed changes to the Aboriginal Heritage Act 1972.

There has been no formal consultation on the proposed changes so far, including with Aboriginal people. Now there are just five weeks for the general public to comment on the proposals.

It is YMAC’s view that the proposals focus too much on the approval process for industry and not enough on improving processes for the effective conservation and protection of Aboriginal heritage sites.

Simon Hawkins, YMAC CEO said today, “Aboriginal people are not just another set of stakeholders. This is their heritage and they deserve an opportunity to provide meaningful input into the reform process. I am sceptical about the current process and of course the short timeframe will not allow for those negatively affected to have their say.”

“For Traditional Owners, the current Act is more a licence to destroy heritage than a mechanism to protect it. These proposals will only reinforce this view.”

Click here for the Department of Indigenous Affairs Discussion Paper

YMAC welcomes the findings of the recent Auditor General’s report on compliance with mining conditions, which highlights what Traditional Owners already know: that Aboriginal heritage in WA is not being adequately protected by the State.

The Auditor General found that the Department of Indigenous Affairs (DIA), which administers the Aboriginal Heritage Act, has failed in its responsibility to monitor compliance with conditions it places on miners for protection of heritage sites. The report states that DIA “has only undertaken inspections of heritage sites when responding to complaints it received, but has taken no enforcement action when it has found non-compliance.”
Peter Jeffries, Acting CEO of YMAC, said, “The AHA operates more as an approval mechanism for the destruction of Aboriginal heritage than as a means for protecting it. YMAC has worked hard over the years to make sure agreements are in place between native title groups and companies to protect heritage. If it weren’t for these private agreements, there would be no real protection for Aboriginal heritage in areas of high development like the Pilbara and Midwest. This report has shown that there are no consequences for illegally destroying Aboriginal heritage in the course of mining projects.”
The report highlights the need to improve the processes for protecting Aboriginal heritage in WA. A review of the Aboriginal Heritage Act was announced in June 2011, but past reviews have not led to improvements in the system.
“We sincerely hope that the review of the Aboriginal Heritage Act leads to major reform that takes into account the importance of our State’s Aboriginal heritage and gives Aboriginal people a significant say in how approvals to destroy heritage are granted,” said Mr. Jeffries.